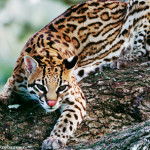 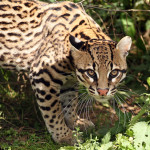 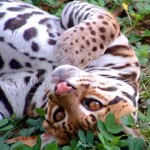 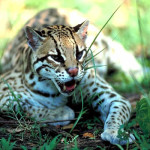 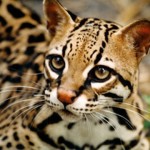 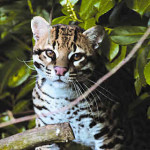 Ocelots are medium sized cats (about two to three times the size of a house cat), with a distinctive dappled pattern, a white underside, and a ringed tail. They are largely nocturnal and shy, hunting at night. The females are usually smaller than the males but otherwise there are no obvious differences between the sexes. Ocelots live in Central and South America, coming as far north as southern Texas and as far south as northern Argentina.

The ocelots’ distinctive spot pattern helps it hide in the dappled light of the jungle.

Eat and be Eaten

What do I eat? Ocelots are carnivores, eating small animals such as rabbits, mice, lizards, fish and frogs.

What eats me? Ocelots’ predators include large snakes, such as boa constrictors and anacondas, larger cat species, such as pumas and jaguars, and Harpy eagles. Harpy eagles are the larges eagles in the world and can weigh as much as 20 lbs and be 3 ft tall (as tall as a child in kindergarten).

Ocelots live in many types of habitats, including tropical forest, savanna, marshes, mangrove. They prefer dense cover and particularly like thorny scrub along streams and rivers. In Central America, they can be found in coastal mangrove forests and swampy savannas. Ocelots share their habitat with many different types of animals, because they have many types of habitat. Some of the other cat species that are found in the same areas include jaguarundi, margay, and jaguar.

• An ocelots’ tail can be one-third the length of its body.

• Like most cats, ocelots teach their kittens to hunt, beginning when they are three months old.

• Like most cats, ocelots are born with their eyes closed and don’t open them until they are two weeks old.

Ocelots are mostly solitary and are territorial. Ocelots mostly move around alone but they make contact with each other frequently, and may maintain a network of social ties. They communicate by mewing.

My View of the World

Ocelots have good hearing, sight, and a great sense of smell for hunting. They often hunt by following the scent trail of prey. They are excellent climbers, jumpers, and swimmers.

Ocelots communicate by yowls during courtship. The male and female mate but they do not remain together after mating. The male has no part in raising the kittens. Ocelot mothers are pregnant for 11-12 weeks. The kittens are born in dens in small caves or hollow trees, which the mothers line with bedding.

Ocelot babies are called kittens. They are born in a litter of 1 to 4 kittens. Newborns are grey and black, and their distinctive dappled pattern appears over the first few months. They nurse for 3-9 months. Kittens are independent at 1 year but may not leave home for another year. Kittens reach their full size at 2 years, and are ready to mate at 18-24 months..

Where you can find them at the zoo: The America’s Exhibit.

The Zoo has two ocelots, one male, named Opi and one female, named Ola. They live alone except when they come together to mate. They have successfully raised three kittens, who are now living at other zoos across the country. Opi is found in the left exhibit, and loves to sleep on the upper rocks in the back of the exhibit. He has a nick in his left ear that Ola gave him. Ola lives in the right exhibit and prefers to sleep next to the rocks in the front of the exhibit. She can often be seen walking her exhibit or rubbing on the mesh between her exhibit and Opi’s. Ola is smaller than Opi and has a particularly long tail.

Ocelots are common in some parts of their range and rare in others. They are considered endangered in the U.S. and protected by the Endangered Species Act. Historically, ocelots ranged from Peru to Arkansas but few are found in U.S. now. The estimated US population is around one hundred animals.

A major threat to ocelots is how much humans like their pretty fur. They were hunted for their fur for many years but widespread hunting stopped in the 1980s. Unfortunately, some ocelots are still killed by poachers who sell their coats illegally. Ocelots are also sometimes killed by farmers who believe the ocelots hunting chickens and other farm birds. Ocelots are somewhat tolerant of disturbed habitat and can be found in wooded patches near human settlements. Habitat loss is also a problem, as are vehicle collisions in populated areas.

Scientists are working on ways to help different ocelots groups contact one another. Migratory corridors between Texas and Mexico and physically moving ocelots from group to group have been considered. Scientists are carefully studying the animals to better understand what they need. Camera trapping is a way to study animals that are shy and primarily come out at night.  Scientists put out cameras that automatically take pictures when something moves in front of it.  This way they can get pictures of the ocelots and see how many live in a habitat.  Ocelots can be distinguished by their spot patterns.

What Our Zoo Does

Our Zoo supports the scientists by contributing money to the Ocelot Recovery Team’s effort to establish a migratory corridor between Texas and Mexico. The Association of Zoos and Aquariums (AZA) works closely w. all accredited zoos housing ocelots to develop a breeding and transfer plan.  This Species Survival Plan (SSP) also tracks ocelot mating and births. Our Zoo works with the ocelot SSP to find homes for our ocelot kittens at other zoos.

• A picture of an ocelot was found carved on a human bone dated from 1500 A.D. in Ohio! This may tell us that ocelots lived in Ohio at that time but it is more likely that someone brought the bone from the south and traded it to the people in Ohio.

• Ocelots have been found in artwork from the Aztec and Inca civilizations.